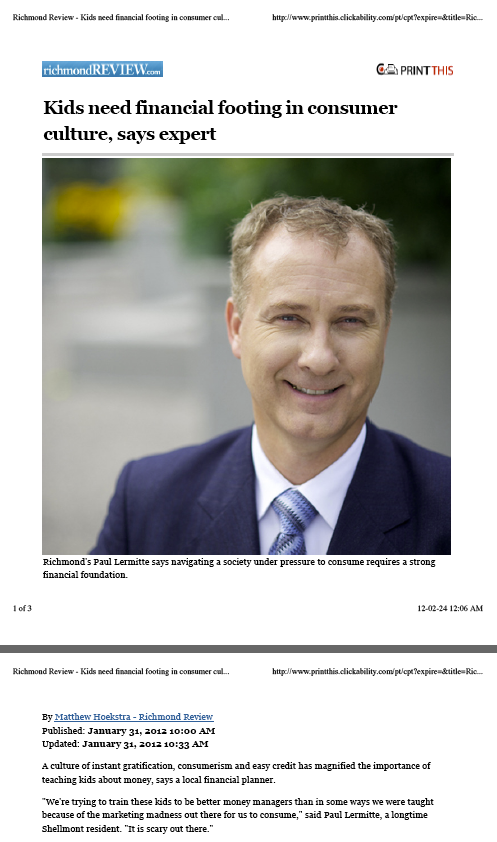 On January 31, 2012, the Richmond Review, one of two primary newspapers in Paul’s hometown, printed this article about Paul’s new-and-improved edition of his bestselling book, Allowances, Dollars and Sense: A Proven System for Teaching Your Children About Money.

Here is the link to the article by Matthew Hoekstra in the newspaper’s archives with an updated title of Set Your Kids Finances Free.

Here is an excerpt from the text from the article, but you really should read the whole thing!

A culture of instant gratification, consumerism and easy credit has magnified the importance of teaching kids about money, says a local financial planner.

Lermitte, 52, is author of Allowances, Dollars and Sense, originally published in 1999 and recently updated and re-released. The book aims to help parents build strong financial foundations in young children—its principles having been practised on Lermitte’s own three children.
An allowance is the first step toward building a strong foundation, he contends, allowing children to learn financial sense while making their own decisions about money. “If they want to go to 7-Eleven and blow it on a Slurpee, a chocolate bar, well if it’s there money, then that’s their decision,” he said. “Then, if they want to go to the movies and don’t have enough coins in the piggy bank, they learn firsthand the impact decisions around money have.

Lermitte’s book, with strategies aimed at children ages five to 12, is available at paullermitte.com and Amazon. His second book, Dreams, Dollars and Sense, is due out May 1 and is written to guide parents of teenagers. Other books are also planned: for 20-to-30-year-olds and for leaders of a family business.